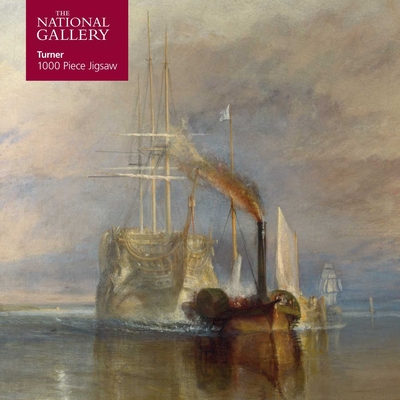 Part of an exciting series of sturdy, square-box 1000-piece jigsaw puzzles from Flame Tree, featuring powerful and popular works of art. This new jigsaw will satisfy your need for a challenge, featuring the National Gallery's Turner: Fighting Temeraire. This 1000 piece jigsaw is intended for adults and children over 13 years. Not suitable for children under 3 years due to small parts. Finished Jigsaw size 735 x 510mm/29 x 20 ins. Now includes an A4 poster for reference. The Fighting Temeraire by Joseph Mallord William Turner was completed in 1839 during the later stages of his career. The shifting pastel tones characterize the dream-like panorama, reflecting a remarkable evocation of nature and technology, as the sky and sea contrast the precise rendering of the ship's form. Crucially, the 98-gun ship occupied a central role during Nelson's Battle of Trafalgar in 1805, and was christened as the 'Fighting Temeraire.' Yet, the painting moves away from the glory and grandeur, as it is thought that Turner tried to exemplify the decline of Britain's naval power. Travelling eastwards away from the sunset, a sense of loss is evoked by Turner's impressionistic vision, hauntingly conveying the serenity and subtle unrest of the scene.

Designed and developed at Flame Tree Publishing, an independent publisher of nearly 30 years. Flame Tree Studio is our creative hub bringing people, ideas and techniques together to make fine, illustrated books, art calendars and practical stationery with delightful, thoughtful combinations of text and images. Our creative teams work with artists, illustrators, licensors, museums and galleries throughout the world to offer carefully crafted, timeless works of art across many complementary formats. Flame Tree: The Art of Fine Gifts.