Before the Military Revolution: European Warfare and the Rise of the Early Modern State 1300-1490 (Hardcover) 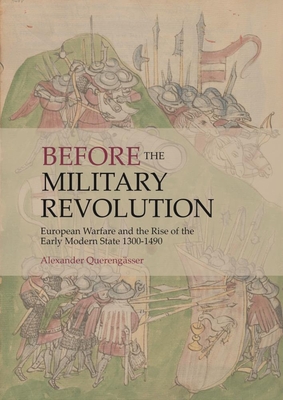 By Alexander Querengässer
$80.00
Email or call for price.

Before the Military Revolution examines European Warfare in the Late Middle Ages from 1300 to 1490. It is not restricted only to well-covered conflicts, like the Anglo-Scottish Wars or the Hundred Years War, but gives due weight to all regions of Europe, including the Empire, the Baltic, the Balkans and the Mediterranean, and considers developments in naval warfare. The Hussite Wars and the wars of the Teutonic Order and the Hanseatic League are covered, as is the expansion of Moscow, the Ottomans and Venice, and battles like Aussig (1426), Copenhagen (1428), Chojnice (1454) are discussed alongside Bannockburn and Agincourt.

This age witnesses fundamental change. The feudal system of the High Middle Ages crumbled everywhere in Europe due to climatic change, economic crisis and population decline. This triggered a fiscalization of the military organization, the establishment of taxes and representation of the estates. This book argues that these changes are the most fundamental ones in the military and political organization in Europe until the rise of the constitutional state around 1800 and so comes closer to the original concept of a Military Revolution. It also takes a critical look at other often discussed developments of this age, like the Infantry and Artillery Revolution or the decline of cavalry. Combining a chronological and regional narrative with deeper analysis of themes like chivalry, strategy, economic warfare or military publications makes this book an indispensable read for everyone interested in late medieval history.