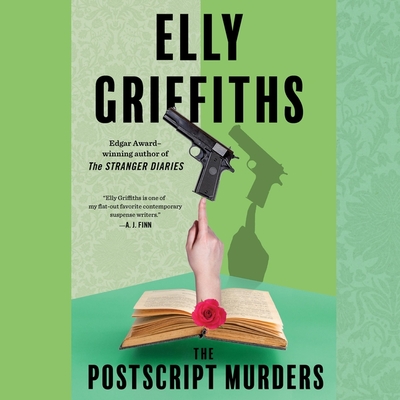 By Elly Griffiths, Nina Wadia (Read by)
$25.00
Email or call for price

DS Harbinder Kaur returns after The Stranger Diaries to solve Griffith's take on a "cozy" murder mystery, but she can't keep an unlikely trio of amateur sleuths from pursuing clues left in mystery novels old and new. The twists and turns are as fair as they are surprising -- I did not spot the murderer before the reveal, but Kaur spotted the clues.

"This droll romp is a latter-day Miss Marple." --Washington PostMurder leaps off the page when crime novelists begin to turn up dead in this intricate new novel by internationally best-selling author Elly Griffiths, a literary mystery perfect for fans of Anthony Horowitz and Agatha Christie. The death of a ninety-year-old woman with a heart condition should not be suspicious. Detective Sergeant Harbinder Kaur certainly sees nothing out of the ordinary when Peggy's caretaker, Natalka, begins to recount Peggy Smith's passing. But Natalka had a reason to be at the police station: while clearing out Peggy's flat, she noticed an unusual number of crime novels, all dedicated to Peggy. And each psychological thriller included a mysterious postscript: PS: for PS. When a gunman breaks into the flat to steal a book and its author is found dead shortly thereafter--Detective Kaur begins to think that perhaps there is no such thing as an unsuspicious death after all. And then things escalate: from an Aberdeen literary festival to the streets of Edinburgh, writers are being targeted. DS Kaur embarks on a road trip across Europe and reckons with how exactly authors can think up such realistic crimes . . .