The Canadian Corps in World War I (Men-at-Arms) (Paperback) 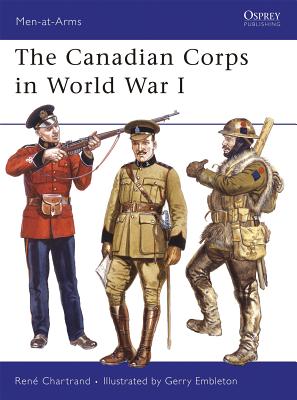 This is book number 439 in the Men-at-Arms series.

In 1914 with a regular army of only 3,110 men Canada was ill-prepared to enter World War I (1914-1918). Yet, in a display of incredible unanimity thousands of young Canadians volunteered to fight for the Allied cause. Ultimately the Canadian contribution was the most important non-British contingent within the vast Allied armies with a total of nearly 700,000 Canadians in uniform. For a nation of only 8 million people this was a remarkable war effort and nearly one of every ten who fought in the war did not return. The Canadians served in all the major conflicts on the Western Front; they were the first troops to suffer a gas attack in 1915 and served at Ypres and the Somme.

The Canadian Corps is most famously remembered for their victory at Vimy Ridge one of the major successes of the war. This victory was also a national coming of age, having started the war as a single division under British command, here for the first time the four divisions of the Canadian Corps had attacked and triumphed together. This national identity was reinforced by the use of their own uniforms, insignia, weapons and equipment which are superbly illustrated within this book. This book also includes a complete listing of units, battalion by battalion, summarizing their proud service record throughout the course of the war including their service on the Western Front, at sea and in the air. The poignant photographs, specially commissioned colour artwork and detailed service records will give a unique insight into the war experiences of the Canadian soldier which ultimately contributed to a real sense of Canadian national identity.

Gerry Embleton has been a leading illustrator and researcher of historical costume since the 1970s, and has illustrated and written Osprey titles on a wide range of subjects for more than 20 years. He is an internationally respected authority on 15th and 18th century costumes in particular. He lives in Switzerland, where since 1988 he has also become well known for designing and creating life-size historical figures for museums.

“Rene Chartrand's The Canadian Corps in World War I is also an excellent recommendation for a specialty military library, surveying the units, organization and uniforms of the four Canadian divisions which gained fame during the battle.” —The Bookwatch (December 2007)