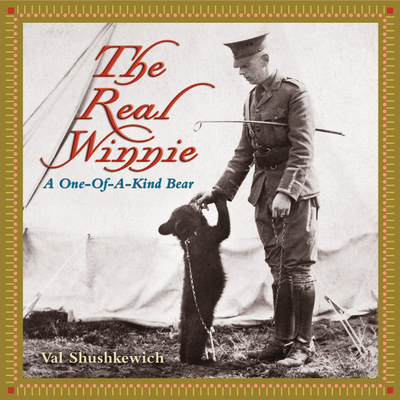 By Val Shushkewich
Email or call for price.
Out of Print

The story of Winnie, the real Canadian bear that captured the heart of Christopher, son of A.A. Milne, and became immortalized in the Winnie the Pooh stories, is told against the backdrop of the First World War. In August 1914, a Canadian soldier and veterinarian named Lieutenant Harry Colebourn, en route to a training camp in Quebec, purchased a black bear cub in White River, Ontario, which he named Winnipeg.

First a regimental mascot for Canadians training for wartime service, Winnie then became a star attraction at the London Zoo, and ultimately inspired one of the best-loved characters in children's literature. For those many generations of readers who adored Winnie the Pooh, and for those intrigued by the unique stories embedded in Canadian history, this book is a feast of information about a one-of-a-kind bear set during a poignant period of world history.

Today Winnie lives on at the London Zoo, in White River and in Winnipeg. Her remarkable legacy is celebrated in many ways - from statues and plaques to festivals and museum galleries.

Val (Valdine) Shushkewich was born and raised in Winnipeg and received a Bachelor of Arts degree from the University of Manitoba, majoring in history and anthropology. Research and writing have long been a personal interest, particularly in the world of nature. While visiting Assiniboine Park Zoo in Winnipeg, she was captivated by the statue of Winnie and Harry Colebourn, and was inspired to write about this very Canadian story. Val currently lives in San Francisco, California, with her husband, Ken.