Capital in Flames: The American Attack on York, 1813 (Paperback) 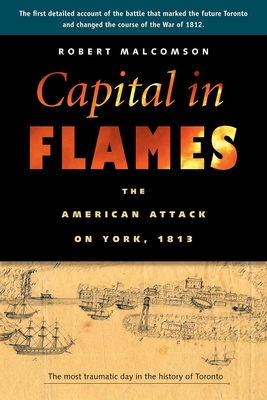 By Robert Malcomson
$27.95
Email or call for price.

The city of Toronto was the frontier town of York in 1813 when it suffered its most traumatic day. Though it was the capital of Upper Canada, York had weak defences, and when military leaders made it the central depot and naval dockyard on the Great Lakes early in the War of 1812, they essentially painted a bull's-eye on the town and its 700 residents.In April 1813 a squadron of warships under U.S. Commodore Isaac Chauncey landed about 1,800 soldiers where today's Canadian National Exhibition grounds are located. Renowned western explorer General -Zebulon Pike led them into battle against -British, Canadian and native defenders commanded by General Sir Roger Hale Sheaffe, victor of the Battle of Queenston Heights. The attackers were pressing forward when a mighty explosion ripped the earth open and rattled windows forty miles away. One general was killed and the other withdrew. Though the Americans had taken the town, the invasion was a disappointment as the vessels they expected to seize were not there and supplies they hoped to capture were destroyed. Discipline broke down and roving gangs of invaders looted and burned public buildings - and the loyalty of some citizens came into question. The young town suffered a trauma few of its inhabitants would ever forget. And Sheaffe, the much-criticized British general, was sent home and never again saw active service.Robert Malcomson brings to life the politicians, soldiers and citizens whose destinies clashed at York. He explores the causes of the event and allows the voices of the mighty and the meek to recount their experiences. Not only does he provide fresh insights into the capture of Upper Canada's capital; he relates the various landmarks of the battle to the modern city, so that readers can walk the ground themselves.

The late Robert Malcomson was a leading expert on the War of 1812 and the Age of Sail on the Great Lakes and the author of several books, including Lords of the Lake: The Naval War on Lake Ontario, 1812-1814 and A Very Brilliant Affair: The Battle of Queenston Heights, 1812.