For God and King: A History of the Damas Legion (1793-1798): A Case Study of the Military Emigration During the French Revolution (From Reason to Revolution) (Paperback) 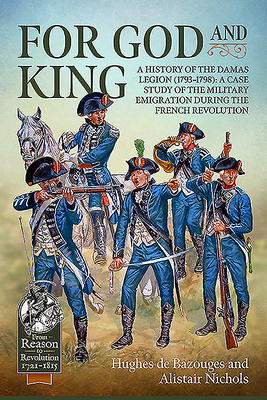 The migr's who left, or were driven from, Revolutionary France included a large part of the officer corps of the former royal army. Joined by others who wished to fight for the restitution of the monarchy in their homeland, these officers soon served this cause in the pay of countries facing the common enemy. With its origins at the 1793 Siege of Maastricht, one unit of such men, and one woman, was raised by Etienne de Damas-Crux for the service of the United Provinces and was to comprise of both infantry and cavalry. After the United Provinces were defeated and invaded in 1795, the unit transferred to the service of Britain. Its infantry companies were destroyed in the ill-fated Quiberon expedition while the cavalry, which grew to a regiment, joined in early 1796 the last migr army, that of the Prince de Cond , and served alongside the Austrians in Southern Germany. Finally, the Damas Hussars disappeared when the Arm e de Cond was reorganised in Russian service.

This is a comprehensive and detailed history of the L gion de Damas which provides a case study of the French military emigration and thus an alternative viewpoint of the Revolution that caused it and the wars that followed. By drawing in particular on memoirs of members of the unit and contemporary material in archives across Europe, from Britain to Russia, the story is told of those who remained steadfast to God and their King.