Off-Road with Clarkson, Hammond & May: The Highs, Lows and Laughter on Tour with the Motoring Legends (Paperback) 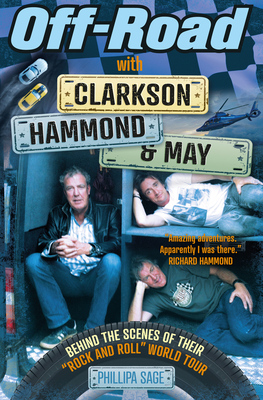 For over 12 years Phillipa Sage worked alongside Clarkson, Hammond and May as their PA, gofer, and fixer where she saw the boys at their best and, hilariously, at their worst. A closet petrol head, Phillipa first worked with Jeremy Clarkson and Andy Wilman (Grand Tour's Executive Producer) in 1997. She proved to be a loyal, trusted friend and colleague to the now infamous trio and became a key member of 'The Bubble', the exclusive, dysfunctional working family that toured the world. With an enormous budget, they travelled like rock stars, taking their unique brand of motoring madness to 18 countries and to over 2 million fans in arenas from New Zealand to Norway. Supported by a large crew and their personal entourage, Clarkson, Hammond and May, when not performing in their high octane, live action show, indulged in extravagant holidays. They and their 'Bubble' family relaxed in luxury resorts or private houses entertaining themselves with pool parties, drinking, motorboat cruises, drinking, jet skiing, drinking and eating. In Off-Road with Clarkson, Hammond & May, Phillipa shares the tour highs, lows and laughter of three incredibly talented, stupid and naughty boys.

Phillipa Sage worked in the motoring industry for over 20 years, supporting, producing and managing live events for the marketing departments of major motor manufacturers and went on to become a key member of the production team for Top Gear Live. She was also part of the crew who produced The Grand Tour for Amazon, working on the pilot and their first film abroad in Jordan. Phillipa went on to have a personal relationship with Jeremy Clarkson and they officially became a couple in 2011. Their relationship ended in 2017. Phillipa lives in Hertfordshire.