Canadian Forces: An Historical Salute to Those on the Front Line (Paperback) 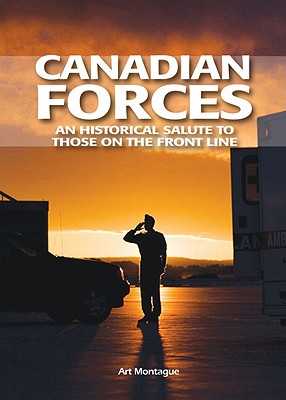 An unabashed appreciation of Canada’s military from early French Canada to current action in Afghanistan, this detailed history has a range that is unprecedented for a single volume. Canadian Forces: An Historical Salute to Those on the Front Line chronicles the humble heroism and often unacknowledged bravery that are part of every Canadian soldier’s story, whether it be the Canadian who won a Victoria Cross during the Charge of the Light Brigade or the members of the Devil’s Brigade—the first Special Forces Unit that fought during World War II. Their military defeats and conquests are described not only through the actual events but also through the personalities, from the generals, admirals, and privates to the medical personnel and the much-loved military cooks. Both entertaining and educational, this book captures the tragedy and comedy that are part of daily life in the Canadian military and recounts the role of military forces in shaping Canada into a distinct, proud nation.

"This book is truly a salute to all those in uniform. From the monumental to the mundane, Montague provides a top to bottom book of all things Canadian Military. What is very refreshing is the writing style captures the same light-hearted wit that embodies the spirit of our service members." —Scott Taylor, author and publisher, Esprit de Corps

"[Montague's] frank prose . . . captures the involvement of our brave men and women in uniform." —General W.J. Natynczyk, Chief of the Defence Staff, Canada