Breathe the Sky: A Novel Inspired by the Life of Amelia Earhart (Paperback) 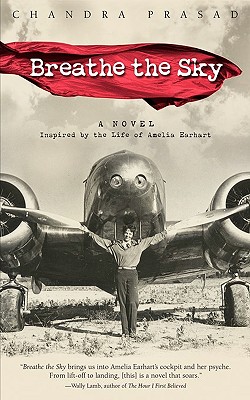 Amelia Earhart disappeared from the world's radar in the 1930s, but she has not been forgotten. Breathe the Sky is a fresh and provocative portrait of the legendary pilot whose courage and charisma have dazzled millions. It is also the first novel to reveal the dark side of Earhart's fame-and the dangerous, madcap course of her final voyage. Venturing where history and biography have not, Breathe the Sky takes the reader on Earhart's last expedition along the equatorial line, through wild storms, across endless desert and jungle, and over shark-infested waters. With stark, nimble prose, Prasad brings Earhart to life once more, securing her place in the pantheon of great explorers, while inspiring risk and adventure in readers.

"BREATHE THE SKY brings us into Amelia Earhart's cockpit and her psyche. ... From lift-off to landing, this] is a novel that soars." --Wally Lamb, author of The Hour I First Believed

"BREATHE THE SKY vividly reimagines the private life of Amelia Earhart. ... Chandra Prasad replaces the romance of the legend with this litany of all-too-human mistakes." --Stewart O'Nan, author of Songs for the Missing

"A powerful, tragic, compelling story, an absolute page-turner by a skilled writer in full command of her characters, her tale, and a fascinating period of history." --Stephen L. Carter, author of Palace Council

"Prasad has built a first-rate time-machine that effortlessly transports us back to the early twentieth-century to view the world through Amelia Earhart's eyes." --Debby Applegate, Winner of the 2007 Pulitzer Prize for Biography and Autobiography

Chandra Prasad is the author of the Connecticut Book Award finalist ON BORROWED WINGS, a Simon & Schuster novel. ON BORROWED WINGS follows a quarryman's daughter as she attends Depression-era Yale University. Sara Gruen, author of Water for Elephants, says, "Prasad has created an inspired and timeless heroine whose intelligence, imagination, and determination have you rooting for her from the very first page." Prasad is also the editor of, and a contributor to, MIXED: An Anthology of Short Fiction on the Multiracial Experience, which was released to international acclaim by W.W. Norton. Her other works include prize-winning short stories and the historical adventure DEATH OF A CIRCUS, which Booklist calls a "richly textured" book "packed with glamour and grit.