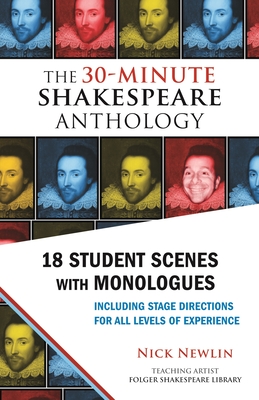 Drawing on his eighteen years of experience as a teaching artist for Folger Shakespeare Library, Nick Newlin offers eighteen scenes to get young actors on their feet performing Shakespeare with confidence, understanding, and fun

Each scene averages five minutes in length, containing two to six characters, and features a monologue that young performers can use in performance, audition, or competition. Every scene has been road tested by one of Newlin's student groups at the Folger's annual Secondary School Shakespeare Festival, and includes dynamic stage directions and incisive performance notes to help teachers and students bring Shakespeare's plays to life.

The 30-Minute Shakespeare Anthology includes one scene and monologue from eighteen of Shakespeare's greatest plays, including Romeo and Juliet, Macbeth, Hamlet, Othello, A Midsummer Night's Dream, Julius Caesar, Much Ado About Nothing, As You Like It, The Merchant of Venice, and The Taming of the Shrew.

Additionally, the anthology contains a scene and monologue from Henry IV Part I, King Lear, As You Like It, The Comedy of Errors, The Tempest, Twelfth Night, The Merry Wives of Windsor, and Love's Labor's Lost.

Also featured is an essay by editor Nick Newlin on how to produce a Shakespeare play with novice actors, and notes about the original production of this abridgment at the Folger Shakespeare Library's annual Student Shakespeare Festival. Each scene and monologue has accompanying notes and performance suggestions.

Nick Newlin has performed a variety act for international audiences for 30 years. Since 1996, he has conducted an annual Play Directing residency affiliated with the Folger Shakespeare Library in Washington, DC. Nick has a BA from Harvard University with Honors 1982 and an MA in Theater from The University of Maryland with an emphasis on Play Directing.