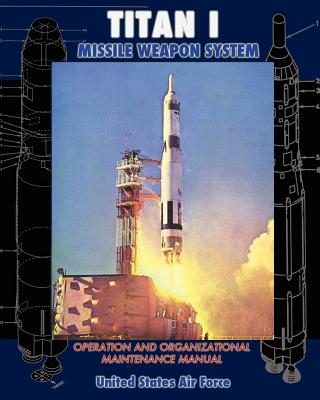 Equipped with a W38 thermonuclear warhead and with a range of 5,500 nautical miles, the Titan I was the Air Force's first multi-stage intercontinental ballistic missile, and a vital part of America's nuclear arsenal in the years 1961-1965. Designed and built by the Glen L. Martin Company (later Martin Marietta), the HGM-25A/SM-68A missile was the first in a series of Titan rockets. Unlike its later siblings, Titan I utilized non-storable and highly volatile LOX and RP-1 as its propellants. As a result the missile had to be fueled prior to launch - a process that took roughly fifteen minutes. It would then be lifted to the surface by an elevator for launch, a process that made it vulnerable to an enemy first strike. The first successful Titan I launch took place in February, 1959. Within a year the first of 54 missiles were delivered to one of what would eventually be six USAF squadrons. The underground silos that made up the Titan I's launch complexes represented a great leap forward from the "coffin type" semi-hardened containers used to protect the Atlas ICBM. Equipped with an underground control center, powerhouse, antenna silos for guidance radars, and a missile silo fitted with an enormous elevator, the Titan I's design offered unparalleled protection to the launch crew. Yet the fueling protocol and surface-launch design limited its appeal to the Air Force. After only three years of full operation, it was replaced by the Titan II system, which could be launched from subterranean silos and utilized storable propellants. Originally created in 1963, this Titan I technical manual was intended to be used by missile combat crews. It is divided into seven sections describing the overall weapon system including launch complex, structures and subsystems, launch operation plan, normal operating procedures, emergency operating procedures, malfunctions, operating limitations, and crew responsibilities. Originally considered highly classified, this document has never before been available to the general public. Until now.