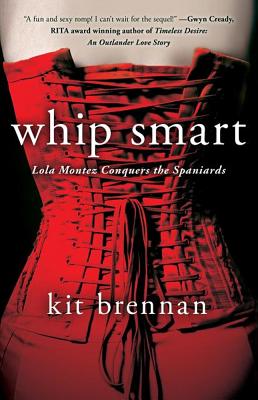 This is book number 1 in the Whip Smart series.

Kit Brennan is an award-winning playwright, who teaches writing and storytelling at Concordia University in Montreal, Quebec, and who has now successfully branched out into a new career as a novelist. With her husband, Andrew, she divides her time between Montreal and the quiet lake wilderness of Ontario, and maintains a disciplined writing regime each morning, revising the previous day s work and then progressing by a further five, or six, pages. In growing up her first interest was in becoming a ballet dancer, but that gave way to a love of horses and an ambition to be a jockey, followed by painting, children s book illustration, and finally acting, yet with writing always in the background somewhere. She worked for a number of years as an actor in the professional theatre before being asked to write a play for children to be performed on tour in elementary schools. This re-kindled her interest in writing and she moved on to become a professional playwright. One of the recurrent themes found in her work is gained from her interest in history, particularly Victorian, and personalities from that era are found in both her plays and novels. She meticulously researches the characters before placing them in a fictionalised setting with sometimes exaggerated adventures, which brings more life and interest to them than is usually possible in a straightforward biography. Her play, "Tiger s Heart," explores the life of Dr. James Barry, who was actually a woman disguised as a man in order to be allowed to practice medicine in an age when this was not permitted, and the debut Whip Smart series of novels is based on the real-life story of Lola Montez, a top notch, notorious bad girl of the Victorian era who was one of the most widely travelled women of her time."