Working Girls: An American Brothel, Circa 1892 / The Private Photographs of William Goldman (Hardcover) 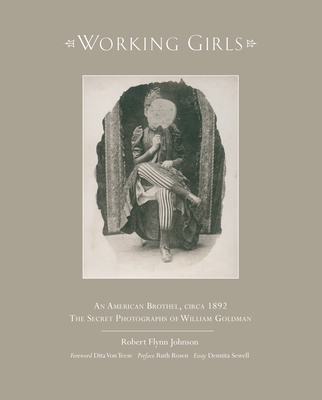 Working Girls chronicles the unique and artful private photographs of commercial photographer William Goldman, whose collection of work captures the deep appreciation and understanding of the group of women who lived and worked at a brothel in Reading, Pennsylvania, circa 1892. Taken two decades before the famous E. J. Bellocq photographs of the 1913 sex workers in Storyville, New Orleans, these beautifully produced photographs are the earliest known body of work on this subject in the United States, only now seeing the light of day. The project began when author Robert Flynn Johnson visited an art fair and became captivated by the beauty and originality of a group of nineteenth century photographs of women. Curious to know more, Johnson began an investigation into their origin, authorship, and purpose. Now, nearly a decade later, he has unearthed more than two hundred vintage photographs of the Reading women, which paint a full picture of the environment that they inhabited--from inside the brothel, posing artistically for the camera, to their off-duty routines, such as reading, smoking, and bathing. Johnson, a noted photography curator, uses these photographs to detail their historical and sociological importance in the history of photography, alongside essays from feminist scholars Ruth Rosen and Dennita Sewell that provide an insightful historical overview of these images in context of the period in which they were taken. The work here also speaks to Goldman's extraordinary aesthetic vision. As burlesque star and foreword writer Dita Von Teese notes, "This fascinating collection of found images more than a century old could not have originated just as a case study on the women employed at a brothel. The local photographer and his anonymous muses appear to straddle an artful titillation, at times striving toward Degas nudes and at another, more in the spirit of a strip and tease. There is beauty in even the most mundane moments.