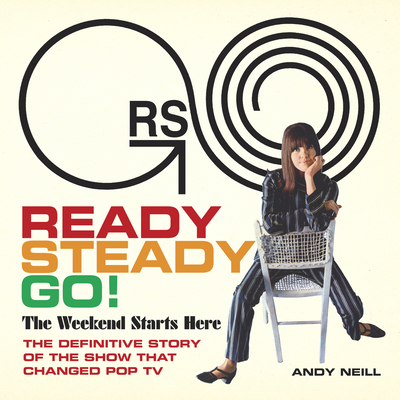 The London-based Ready, Steady, Go! began broadcasting in August of 1963 and, within a matter of weeks, became an essential television ritual for the newly confident British teenager. It set trends and became the barometer for popular culture by attracting and presenting anyone who was anyone in popular music: The Beatles, The Rolling Stones, The Who, The Kinks, The Animals, Marvin Gaye, The Supremes, Otis Redding, and many more. RSG! also provided the first small screen exposure for then-unknowns such as Rod Stewart, Marc Bolan, David Bowie, Donovan, and Jimi Hendrix. Ready, Steady, Go! ran for three and a half years, setting a blueprint for music presentation and production on television that resonated over the following decades and can still be felt today. Featured in this lavishly illustrated and definitive history of the show are hundreds of color and black and white images—the bulk of them previously unpublished—as well as exclusive essays by Mick Jagger, Pete Townshend, Ray Davies, Eric Burdon, Donovan, Andrew Oldham, Lulu, and others. Also included is a detailed guide to all 173 episodes—with complete artist appearances and the songs they performed—as well as forewords from the show’s original editor Vicki Wickham and acclaimed director Michael Lindsay-Hogg. This is the first full documentation of the show that went from quintessential Swinging London accessory to its current status as the most legendary popular music program of all time.

Andy Neill is a music writer, researcher and historian, based in Hertfordshire, England. He co-wrote the best-selling, illustrated authorized biography, Anyway Anyhow Anywhere: The Complete Chronicle Of The Who (Friedman/Fairfax, 2002). Additionally, he compiled and annotated two Beatles photo anthologies, Across The Universe: The Beatles On Tour And On Stage (Haynes Publishing, 2009) from the Daily Mirror’s photo archive, and Looking Through You: Rare And Unseen Photographs From The Beatles Book Monthly Archive (Omnibus Press, 2015). He is the author of the acclaimed biography, Had Me A Real Good Time about the lives and careers of Rod Stewart and the Faces (Omnibus Press, 2011). Andy has compiled and/or contributed extensive liner notes for various archive reissues, including the back catalog of the Who and the Kinks. He has been consultant, editor and archive producer on numerous best-selling music biographies and documentaries. His writing has appeared in magazines including Record Collector, Mojo, and Ugly Things. Michael Lindsay-Hogg is a pioneering television, film, music video, and theater director who launched his career helming episodes of Ready Steady Go!. He went on to direct the Rolling Stones Rock and Roll Circus, the Beatles film Let it Be, and numerous other productions. Vicki Wickham produced Ready Steady Go! and was Dusty Springfield's longtime manager. In 1999 she received the music industry's Woman of the Year Lifetime Achievement Award. Ray Davies is a singer, songwriter and musician best known as as the front man and primary songwriter for the Kinks. Mick Jagger is a singer, songwriter, actor, and film producer best known as the lead singer and one of the founder members of the Rolling Stones. Pete Townshend is a multi-instrumentalist, singer and songwriter best known as the co-founder, principal songwriter, and guitarist for the Who.