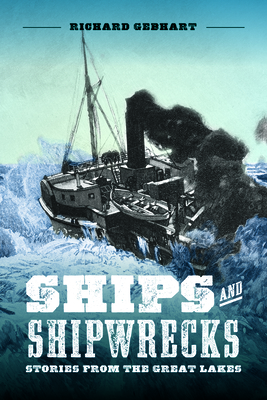 From the day that French explorer Robert Cavelier de La Salle launched the Griffin in 1679 to the 1975 sinking of the celebrated Edmund Fitzgerald, thousands of commercial ships have sailed on the vast and perilous waters of the Great Lakes. In a harbinger of things to come, on the return leg of its first trip in late summer 1679, the Griffin disappeared and has never been seen again. In the centuries since then, the records show that an alarming number of shipwrecks have occurred on the Great Lakes. If vessels that wrecked but were later repaired and returned to service are included, the number certainly swells into the thousands. Most did not mysteriously vanish like the Griffin. Instead, they suffered the occupational hazards of every lake boat: collisions, groundings, strands, fires, boiler explosions, and capsizes. Many of these disasters took the lives of crews and passengers. The fearsome wrath of the storms that brew over the Great Lakes has challenged and defeated some of the staunchest vessels constructed in the shipyards of port cities along the U.S. and Canadian lakeshores. Here Richard Gebhart tells the tales of some of these ships and their captains and crews, from their launches to their sad demises—or sometimes, their celebrated retirements. This volume is a must-read for anyone intrigued by the maritime history of the Great Lakes.

RICHARD GEBHART was director of the White River Light Station lighthouse museum from 1975 to 1980. He has authored numerous articles of historical interest and essays for journals and newsletters of Great Lakes historical societies.

Today it is hard to imagine the important role carrier pigeons played in communications involving ships and sailors on the Great Lakes. In Richard Gebhart’s book, we learn about the history of the development of wireless communications from transmitting signals across a garden to receiving a simple message across the Atlantic Ocean. The author’s detailed presentation of this history makes for interesting reading.—Carl Eisenberg, president of the Wisconsin Marine Historical Society

It is with pure enjoyment and professional interest to learn the histories of things like lakes-based schooners trading on the Atlantic, the Plimsoll mark, and wireless on the Great Lakes, among others. Little known facts of how the Great Lakes shipping industry developed are woven into these accounts of hardship and progress that will be of interest to anyone with a love of history and a good story. Richard Gebhart’s detailed descriptions and amusing artistic narration brings to life these forgotten tales.—George P. Haynes, U.S. Registered Pilot, Lakes Pilots Association, and former grand president, International Ship Masters’ Association

Richard Gebhart loves the Great Lakes and the vessels that sailed the lakes. He is a consummate researcher and loves to tell the stories of those vessels. His book is an excellent compilation of just some of those historic stories. It is informative and fun to read.—Stephen Haynes, editor, Soundings newsletter, Wisconsin Marine Historical Society


For nearly forty years Richard Gebhart has been researching vessels at the Great Lakes Marine Collection. He has turned this research into a historical sail on the lakes and even through the Welland Canal and St. Lawrence River to faraway places such as England, Scotland, France, Spain, Buenos Aires, and Portugal. Although many of these vessels met with disaster, Gebhart has filled out their history with many entertaining stories.—Suzette J. Lopez, caretaker, Great Lakes Marine Collection, Milwaukee Public Library, and executive director, Wisconsin Marine Historical Society