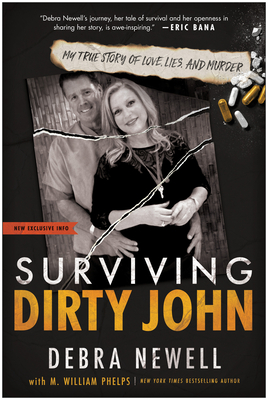 Now that articles, podcasts, newsmagazines, and miniseries have had their sensationalistic say, Debra Newell, the one woman who truly knows what it was like to survive “Dirty John” Meehan shares the full story—the reality—with the world for the first time.

Debra Newell is nothing if not a survivor. By the time she met John Michael Meehan online, she lived through a near-fatal childhood illness, an attempted rape in her 20s, the traumatic death of her sister at the hands of her brother-in-law, four failed marriages, and a litany of dating disasters. But despite those tragedies, she  seemed to have it all: adoring children, a successful business, a fabulous penthouse apartment.

But there was something missing: the blinding, all-consuming love she first read about to occupy her time in her childhood sickbed. And she thought she found it with John Meehan.

More than a tabloid-ready true-crime expose, Debra’s story is one of trauma, denial, and deception. But it is also a relatable, inspirational, and hopeful story of forgiveness and, most of all,  love. The lengths to which a woman will go to find—and keep—love; the boundaries children and parents cross to protect and save the people they love; the love one must find for oneself;  and the ways the illusion of love can be used to manipulate and hurt.

Told in Debra’s words with the help of New York Times bestselling author M. William Phelps, this book is filled with exclusive  stories about Debra and her family, previously unpublished  photos, and the unvarnished, unapologetic, and unbelievable reality of Surviving Dirty John.

In October 2017, the Los Angeles Times launched a six-part article series and accompanying podcast created by Wondery, titled Dirty John. Dirty John is a story of love, deceit, denial, revenge and ruin that ultimately leads to a story of survival that chronicled a time in Newell’s life between October 2014 and August 2016. The story was adapted into a miniseries, which premiered on Bravo in November 2018 and on Netflix in February 2019. Newell has been featured in People, US Magazine, Harper Bazaar, Forbes, The New Yorker, Vulture, Refinery29, and Bustle to name a few. Additionally, Newell has made appearances on Dateline NBC, Dr. Phil, Dr. Oz, Megan Kelly Today, Inside Evil with Chris Cuomo, Fox News, Oxygen’s Dirty John: The Dirty Truth amongst many other media outlets.

Due to her staggering real-life experiences, Newell now spends much of her time as an advocate for change and awareness helping women caught up in coercive controlling relationships. She is currently working to criminalize coercive control, a form of abuse that often goes unpunished because of the lack of awareness and existing legal ramifications. Los Angeles city prosecutors.