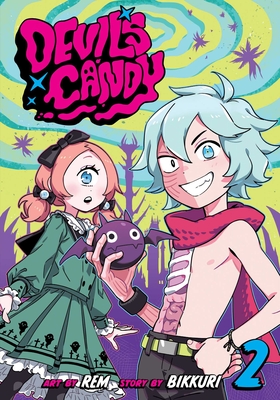 Devil’s Candy, the popular webcomic by Rem and Bikkuri, is a hilarious action-adventure that follows Kazu Decker and his science experiment, Pandora, as they navigate high school with a ghoulish supernatural twist.

At Hemlock Heart Academy, science wiz Kazu Decker shows off his skills by creating a humanoid girl named Pandora. But in a world of monsters and mayhem, surviving high school is harder than getting good grades and lessons often turn violent at Hemlock. Fortunately for them, Pandora’s stoic nature and seemingly limitless strength, paired with Kazu’s luck, knowledge and friends, get them out of trouble almost as often as it gets them mixed up in it!

Kazu is having a hard time getting used to Pandora’s growing independence, but then an elite rival academy, Sacred Crown, challenges the ill-matched students of Hemlock Heart to a violent game of Eggscram. Pandora’s unlimited strength soon gets recognized by a society of sinister daemons beyond the schoolyard, and now it’s not just Kazu who wants Pandora’s attention! Is Pandora prepared to take the step from schoolyard skirmishes into the wrath of the daemon world?

Rem is a professional manga artist and illustrator living in the U.S. Her early manga work was recognized in winning entries for Kodansha’s Morning International Manga Competition and TokyoPop’s Rising Stars of Manga. She has since published successful manga series such as the SOULLESS and Vampire Kisses manga adaptations, before launching Devil’s Candy, her first long-form original webcomic, in 2014 with weekly updates.

Bikkuri is a prolific manga adapter, voice actor, and scriptwriter who has worked on popular anime series such as One Piece and Ghost in the Shell. Frequently collaborating with Rem, including their winning entry for Kodansha’s Morning International Manga Competition, Devil’s Candy is Bikkuri’s longest-running series.