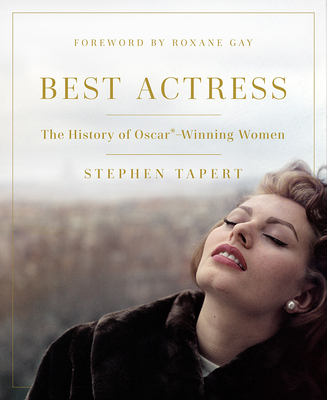 The history of actresses in Hollywood is fraught with gender discrimination. Generally, their roles are over sexualized, and their pay is underwhelming in comparison to men. This photographic history shows us the progression of tinseltown art and consciousness, from Janet Gaynor’s inaugural 1920 win to the famous (infamous?) Frances McDormand 2018 acceptance speech.  An essential text for the film lover or #metoo activist in all of us.

Ingrid Bergman. Audrey Hepburn. Elizabeth Taylor. Jane Fonda. Meryl Streep. The list of women who have won the coveted and legendary Academy Award for Best Actress is long and varied. Through this illustrious roster we can trace the history of women in Hollywood, from the rise of Mary Pickford in the early 20th century to the #MeToo and Time’s Up movements of today, which have galvanized women across the world to speak out for equal pay, respect, power, and opportunity.

This lavishly illustrated coffee table book offers a vital examination of the first 75 women to have won the Best Actress Oscar over the span of 90 years. From inaugural recipient Janet Gaynor to Frances McDormand’s 2018 acceptance speech that assertively brought women to the forefront, Best Actress: The History of Oscar®-Winning Women serves to promote a new appreciation for the cinematic roles these women won for, as well as the real-life roles many of them played – and still play – in advancing women’s rights and equality. Stories range from Bette Davis’ groundbreaking battle against the studio system; to the cutting-edge wardrobes of Katharine Hepburn, Diane Keaton and Cher; to the historical significance of Halle Berry’s victory; to the awareness raised around sexual violence by the performances of Jodie Foster, Brie Larson, and others.

Showcasing a dazzling collection of 200 photographs, many of which have never before been seen or published, Best Actress honors the legacies of these revered and extraordinary women while scrutinizing the roadblocks that they continue to overcome.

STEPHEN TAPERT earned his M.A. from the University of Chicago. He worked for eight years at the Academy of Motion Picture Arts and Sciences, where, as a museum researcher, he provided foundational work for the Academy Museum of Motion Pictures. He subsequently curated an exhibition on the Best Actress Oscar winners at the Museo Nazionale del Cinema in Turin, Italy, and at the Deutsche Kinemathek in Berlin, Germany. He currently teaches film studies at the New York Film Academy in Los Angeles.

"This book presents a frank and timely narrative of the boundary-pushing winners of the Best Actress Oscar and should be on every library shelf."
— Andie MacDowell

“A smart and thought-provoking journey that doesn't miss a bump or a turn in its depiction of the important role women have played in the development of American cinema.”
— Liza Minnelli

“This book is a valuable contribution that illustrates the profound changes that have characterized the role of women in the film world while demonstrating – time and again – how the ability to entertain is never far from the front lines of social change.”
— Susan Sarandon

"While providing a wonderful opportunity to retrace the history of the Academy Awards through the great actresses who have won its top prize, this book shines an important spotlight on the prejudices that women in the film industry have continuously battled."

"Open Tapert’s elegant doorstopper of a coffee-table book and you’ll find yourself face to face with Frances McDormand looking as if she has a trick up her sleeve....[Tapert] presents stars the way we want to see them: in action."
— New York Times Book Review

" It's a book that can be read from start to finish with grace or a book where traveling to your favorite actress in any order is in order to enjoy."
— Edge Media Network

"Author Stephen Tapert fascinates by retelling the story of the 75 women who, over the decades, have won the coveted Academy Award for their work in the main female role in a movie....Consider it the perfect early Christmas present for the film buff in your life, or for yourself."
— Yahoo! Entertainment

"It is quite fitting to read Stephen Tapert’s nearly 500-page history of Best Actress Academy Award winners during Oscar season, of course. But it’s a book to be read and enjoyed any time, really. While we all know the details of the careers of recent winners like Brie Larson and Frances McDormand, Tapert spends just as much time on legendary figures like Norma Shearer and Marie Dressler. The chapter about Shearer’s tragic life is especially moving."
— The Film Stage

"The lives and legacies of Best Actress Oscar winners: A new book celebrates the leading ladies who reshaped Hollywood" by Susie Allen
https://mag.uchicago.edu/arts-humanities/lives-and-legacies-best-actress-oscar-winners

"No women's history or performing arts library should be without this in-depth survey."
— Donovan's Literary Services

"Tapert’s highly engaging content allows readers to discover more about films or actresses they know a little about and to learn about less familiar ones....[An] impressively detailed and beautifully presented publication."
— Historical Journal of Film, Radio and Television

"Tapert’s highly engaging content allows readers to discover more about films or actresses they know a little about and to learn about less familiar ones. The detailed ‘notes’ section demonstrates the detailed research that has gone into each actress, including scholarly works, biographies, magazine articles and website. Furthermore, an abundance of photographs are included, many featuring the women receiving their award or performing in their Oscar-winning role. Tapert notes that many are rare and previously unpublished, thus adding another layer of exclusivity to this impressively detailed and beautifully presented publication."
— Historical Journal of Film, Radio and Television