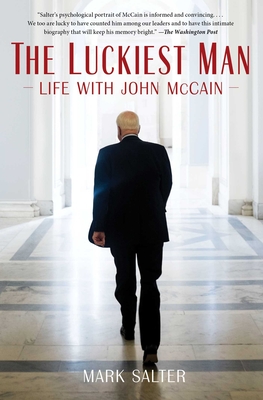 A “moving and lucidly written memoir” (The Wall Street Journal) of the late Senator John McCain from one of his closest and most trusted confidants, friends, and political advisors.

More so than almost anyone outside of McCain’s immediate family, Mark Salter had unparalleled access to and served to influence the Senator’s thoughts and actions, cowriting seven books with him and acting as a valued confidant. Now, in The Luckiest Man, Salter draws on the storied facets of McCain’s early biography as well as the later-in-life political philosophy for which the nation knew and loved him, delivering an intimate and comprehensive account of McCain’s life and philosophy.

Salter covers all the major events of McCain’s life—his peripatetic childhood, his naval service—but introduces, too, aspects of the man that the public rarely saw and hardly knew. Woven throughout this narrative is also the story of Salter and McCain’s close relationship, including how they met, and why their friendship stood the test of time in a political world known for its fickle personalities and frail bonds.

Through Salter’s revealing and “psychological portrait” (The Washington Post) of one of our country’s finest public servants, McCain emerges as both the man we knew him to be and also someone entirely new. Glimpses of his restlessness, his curiosity, his courage, and sentimentality are rendered with sensitivity and care—as only Mark Salter could provide. The capstone to Salter’s intimate and decades-spanning time with the Senator, The Luckiest Man is the authoritative last word on the stories McCain was too modest to tell himself and an influential life not soon to be forgotten.

“Franklin Roosevelt had Louis Howe and Harry Hopkins, JFK had Ted Sorensen and Arthur Schlesinger Jr., and John McCain had Mark Salter. In this compelling, honest, and much-needed book, Salter, McCain’s longtime coauthor and adviser, captures the raucous, resilient, and invigorating spirit of the late war hero and legendary senator. McCain wasn’t always right, but he was always decent, and Salter’s terrific account reminds us of what public service—and public servants—ought to be like.”—Jon Meacham

“A moving and lucidly written memoir....Mr. Salter’s admiration for his old boss is profound, but he is aware, too, of McCain’s complexity....reading Mr. Salter’s fine memoir, I am confirmed in an old opinion: that it is one of the great tragedies of our politics that John McCain was never elected president. America was just unlucky, I guess."—Wall Street Journal

"Salter’s psychological portrait of McCain is informed and convincing....McCain may have considered himself 'the luckiest man on earth,' but we too are lucky to have counted him among our leaders and to have this intimate biography that will keep his memory bright."—The Washington Post