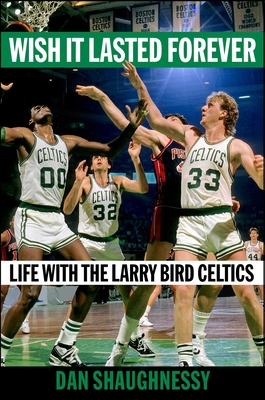 Award-winning columnist Dan Shaughnessy was the Celtics beat writer for the Boston Globe from 1982-1986, spending nearly every day of the season with the team. A must-read for Celtics fans, this is a highly entertaining, often laugh-out-loud trip down memory lane, narrated by many of the iconic players and others who were part of those tumultuous championship years.

Today the NBA is a vast global franchise—a billion-dollar industry seen by millions of fans in the United States and abroad. But it wasn’t always this successful. Before primetime ESPN coverage, lucrative branding deals like Air Jordans, and $40 million annual player salaries, there was the NBA of the 1970s and 1980s—when basketball was still an up-and-coming sport featuring old school beat reporters and players who wore Converse All-Stars.

Enter Dan Shaughnessy, then the beat reporter for The Boston Globe who covered the Boston Celtics every day from 1982 to 1986. It was a time when reporters travelled with professional teams—flying the same commercial airlines, riding the same buses, and staying in the same hotels. Shaughnessy knew the athletes as real people, losing free throw bets to Larry Bird, being gifted cheap cigars by the iconic coach Red Auerbach, and having his one-year-old daughter Sarah passed from player to player on a flight from Logan to Detroit Metro.

Drawing on unprecedented access and personal experiences that would not be possible for any reporter today, Shaughnessy takes us inside the legendary Larry Bird-led Celtics teams, capturing the camaraderie as they dominated the NBA. Fans can witness the cockiness of Larry Bird (who once walked into an All-Star Weekend locker room, announced that he was going to win the three-point contest, and did); the ageless athleticism of Robert Parish; the shooting skills of Kevin McHale; the fierce, self-sacrificing play of Bill Walton; and the playful humor of players like Danny Ainge, Cedric “Cornbread” Maxwell, and M.L. Carr.

For any fan who longs to return—for just a few hours—to those magical years when the Boston Garden rocked and the winner’s circle was mostly colored Boston Green, Wish It Lasted Forever is a masterful tribute to “the Celtics from 1982–1986 [that] is so good even fervent Celtics haters will have trouble putting it down” (New York Post).

Dan Shaughnessy is a sports columnist for The Boston Globe, as well as the New York Times bestselling coauthor of Francona and author of The Curse of the Bambino. When not writing, Mr. Shaughnessy can often be found at a Red Sox game at Fenway Park. He has been selected as Massachusetts Sportswriter of the Year fourteen times and he lives with his family in Boston.

“Colorful, fast-paced . . . Wish It Lasted Forever packs the stat sheet with entertainment from the Celtics’ glory years: Shaughnessy always leads the league in shots taken, but here he also provides plenty of rebounds, assists, and stolen laughter. Wish It Lasted Forever is an insider’s look into the outmoded culture of the game.”
—The Boston Globe

“It would be nearly impossible for me to get more from a book…Wish It Lasted Forever is a juicy, dishy, fun, insightful read on the 1980s Celtics.  Love it, love it, love it.”
—Jeff Pearlman, author of Showtime and The Bad Guys Won!

"What happens when a legacy writer travels with a legacy team in the golden age of access? This is a tour de force by Dan Shaughnessy. I devoured it in one flight to L.A. Attention Christmas shoppers—just a tremendous book."
—Ian O'Connor, columnist for the New York Post, and author of Belichick, The Captain, and Arnie and Jack

“Ought to be high on your list…Dan Shaughnessy’s memoir of covering the Celtics from 1982-86 is so good even fervent Celtics haters will have trouble putting it down.”
—New York Post

"Take a seat on the bus, kids, with Larry and Kevin, Chief and Max, DJ and K.C., and Danny and Red and Bill Walton, too. Wish It Lasted Forever is retro gold. This is a special book about a special time. Terrific.”
—Leigh Montville, former Senior Writer at Sports Illustrated

"Throughout, the author is amiable and self-effacing, but the best parts of his book are the you-are-there accounts…Often funny, Shaughnessy’s book offers considerable insight into the making of a winning team in the hands of players who some consider to be the greatest in the history of the game. A treat for fans of the old Boston Celtics and for roundball fans generally."
—Kirkus Reviews

“This is the story of a great team, rendered in an immersive style. It’s also a writer’s coming of age story. Looking back on that team and time, it was Bill Walton who said, ‘I wish it lasted forever.’ He was speaking for the scribe as well.”
—Bob Costas, 28-time Emmy Award-winning sportscaster

"The best books are built on great reporting, great access, and great writing—access often being the toughest part of the equation. Dan Shaughnessy's new book has it all. Enjoy it."
—John Feinstein, New York Times bestselling author of A Season on the Brink and coauthor, with Red Auerbach, of Let Me Tell You a Story

“In Dan Shaughnessy’s wonderful book you will encounter exchanges that could never happen today. What I’m here to say is: Wish It Lasted Forever brought back untold pleasant memories of what could only be termed a Lost World. You’ll wish this book lasted forever.”
—Bob Ryan, former Boston Globe columnist, Four-Time National Sportswriter of the Year and coauthor, with Larry Bird, of Drive

“Peels back the curtain on the pulsating Celtics teams of the 1980’s with insight, candor and brashness…A revealing account.”
—Jackie MacMullan, coauthor, with Larry Bird and Earvin Magic Johnson, of When the Game Was Ours

“A book that brings to life those wonderful nights when Larry Bird and his remarkable teammates reminded fans around the country of how strongly Celtic Pride can coax the best from players. Dan Shaughnessy understands what attracted guys like me to the game.”
—Bob Cousy, MVP, 13-time All Star, member NBA Hall of Fame

“You will devour this book, even if you’re too young to have experienced, as they were happening, these indelible moments from one of the greatest eras in basketball…Incredible stories.”
—Abby Chin, NBA Broadcaster, Celtics Courtside Reporter

“Dan Shaughnessy has long been an insider and has great knowledge of the game, which is on display in this look back at teams I played on. He has irritated the hell out of me but has entertained me at the same time.”
—Cedric Maxwell, Boston Celtic 1977-1985, MVP of 1981 NBA Finals

"Another book on Larry Bird? Yes, and it's delicious.”
—Lesley Visser, Hall of Fame sportscaster