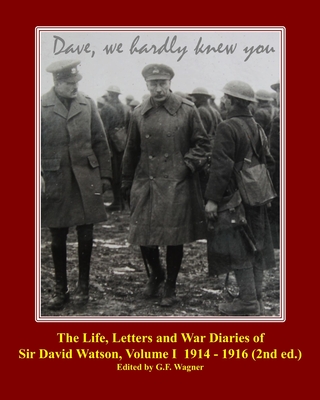 All maps and photographs in the 2nd Edition are in Black & White. To the Reader ..... this book was not supposed to be.I only sought out Sir David Watson's War Diaries to find all references to my grandfather, who was his Aide-de-Camp during 1916. In the process, I became engrossed in the diaries and read them in their entirety. Simultaneously, I sought out all references to Watson in the history books. Here I discovered that the man described in the books was not the man revealed in the diaries. Historians have characterized Watson as a political insider who used his wealth and connections during the war to obtain high command. He has likewise been judged as one of the worst Canadian Generals of World War I. Comments from friends, however, and the diaries and letters, reveal him otherwise as a modest man who cared deeply about his men, deliberately shared their privations, and worked tirelessly on their behalf. Watson was born in Quebec City to humble circumstances. And yet, he became renowned there, first as a star athlete, and subsequently as one of its wealthiest citizens. His was one of Horatio Alger's rags-to-riches tales, except that in his case, it was all true. Then at age 45, he went overseas and rose from Colonel to Major-General in the Canadian Corps. He led 2nd CDN Battalion, 5th CDN Brigade and then 4th CDN Division from 1916 until War's end, and was knighted for his service. He then died suddenly of a stroke in 1922. And so my original intention, which was to learn more about my grandfather, subsequently morphed into a desire to set the record straight on Sir David Watson's character and war record. To this end, Watson's War Diaries have been transcribed in full, and interwoven chronologically with letters written and received, and newspaper articles by journalists who visited him at the Front. Watson wrote to family, the CDN General Staff, and friends such as Max Aitken (Lord Beaverbrook). The letters reveal his views on American neutrality, citizen soldiers, his conversations with German prisoners, and his thoughts on the war in general. Editorial comments have been inserted where necessary, only for clarity's sake and to otherwise inform the reader. Viewed collectively, the diaries and letters put an entirely different slant on the man. And, for diehard fans of Great War history, his thoughts & experiences make for interesting reading. Volume I covers Watson's early life (1869-1914) and the first three years of the Great War (1914-1916), supplemented by some 70 photographs and maps, most of which have never been seen before.Here is a response received thus far on Volume 1.Dear Sir, I recently purchased and received the first volume of the letters and diaries of Sir David Watson you edited and published. I would like to congratulate you for your great work As a military historian, your book will be very useful to me. I had the chance to see the original diaries a few years ago in Calgary.Have you published the second volume yet? If so is there a way to purchase it? If not is there a release date for it?Sincerely yours, Michel Litalien.