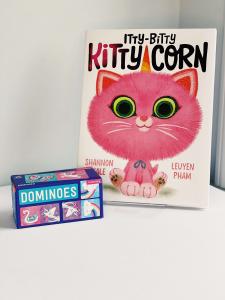 Name somebody who doesn't love unicorns. You can't, can you?

This bundle pairs a sweet story of acceptance with a fanciful set of unicorn dominoes.

From bestselling superstar duo Shannon Hale and LeUyen Pham comes a delightful kitty and unicorn story that celebrates the magic of friendship—and being exactly who you want to be! Kitty thinks she might be a unicorn. She feels so perfectly unicorn-y! “Neigh!” says Kitty. But when Unicorn clop clop clops over, sweeping his magnificent tail and neighing a mighty neigh, Kitty feels no bigger than a ball of lint.

Unicorn Dominoes from Mudpuppy includes 28 oversized double-sided dominoes featuring colorfully illustrated unicorns, swans, rainbows, shooting stars and more on one side and numbered stars on the opposite side—two ways to play!