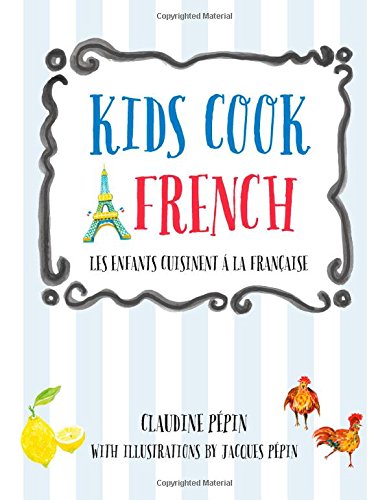 According to Jacques Pepin, "the moment for a child to be in the kitchen is from the moment they are born." Kids Cook French, written by his daughter Claudine, is a fun, interactive cookbook for kids that introduces them to the art and joy of cooking. It gets them interested in making their own meals and better eating habits, while also teaching them the importance of culture.

Featuring classic, simple dishes inspired by French cuisine, each recipe is shown in both French and English, and accompanied by charming illustrations. With an emphasis on fresh ingredients and hands-on preparation, dishes include traditional starters, mains, and desserts. Your child's creativity will be sparked, as will your deeper connection with them. So, get them in that kitchen and start playing chef. Who knows - you might have the next French Chef standing next to you!

"Kids Cook French is a magical introduction to some of the most delicious French classics. With Claudine's recipes, her father's and her daughter's illustrations, this is a book by a family for your family." - Dana Cowin, Editor in Chief, FOOD & WINE

Many of you have watched Claudine Pépin in partnership with her father, world-renown chef, Jacques Pépin, preparing delicious meals and sharing cooking techniques on Public Television. All three of their series have received the notable James Beard Award. In addition, Claudine has had numerous television appearances including "Cooking Live with Sara Moulton,""Good Morning America," and "Multo-Mario." Claudine and Jacques Pepin appear together for a final cooking series "Jacques Pépin: Heart & Soul."

With an undergraduate degree in Political Science and Philosophy, and graduate work in International Relations from Boston University, Claudine spent a great deal of time in the wine industry. She spent two years as the 'Brand Ambassador' for Moet & Chandon and Dom Perignon Champagne in New York while also teaching food and wine pairing for both the French Culinary Institute and the Sommelier Society in New York.

In 2002, Claudine was named "Woman of the Year" by the Academie Culinaire de France - Filiale des Etas Unis. She continues to do television as well as events including The Metropolitan Cooking & Entertaining Show, and the Aspen, Newport, Kohler and Pebble Beach Food & Wine Magazine weekends and is a guest instructor and host for Food University which tours nationally. Claudine, her husband Rollie, a Faculty Member at Johnson and Wales University in Providence, along with their daughter Shorey, and two mischievous cats, have relocated from Colorado to Rhode Island.

Her philosophy for food is closely tied to family. Claudine cooks at home almost every day, believing that sharing a meal with family and friends, eating, laughing and spending time together at the table is one of the most enjoyable and rewarding things in life. "Food doesn't have to be complicated. It needs to be wholesome, nutritious and preferably well seasoned. And, it's always best when shared with those you love."