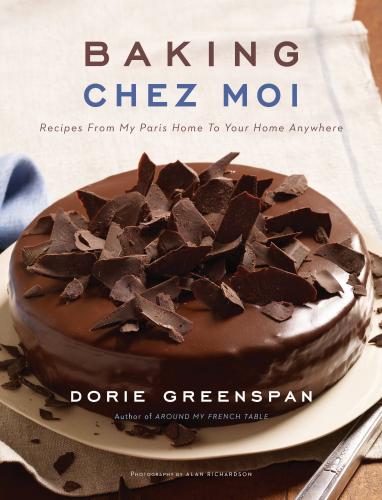 A “culinary guru” and author of the award-winning Around My French Table and Baking: From My Home to Yours returns with an exciting collection of simple desserts from French home cooks and chefs.

With her groundbreaking bestseller Around My French Table, Dorie Greenspan changed the way we view French food. Now, in Baking Chez Moi, she explores the fascinating world of French desserts, bringing together a charmingly uncomplicated mix of contemporary recipes, including original creations based on traditional and regional specialties, and drawing on seasonal ingredients, market visits, and her travels throughout the country.

Like the surprisingly easy chocolate loaf cake speckled with cubes of dark chocolate that have been melted, salted, and frozen, which she adapted from a French chef’s recipe, or the boozy, slow-roasted pineapple, a five-ingredient cinch that she got from her hairdresser, these recipes show the French knack for elegant simplicity. In fact, many are so radically easy that they defy our preconceptions: crackle-topped cream puffs, which are all the rage in Paris; custardy apple squares from Normandy; and an unbaked confection of corn flakes, dried cherries, almonds, and coconut that nearly every French woman knows. Whether it’s classic lemon-glazed madeleines, a silky caramel tart, or “Les Whoopie Pies,” Dorie puts her own creative spin on each dish, guiding us with the friendly, reassuring directions that have won her legions of ardent fans.

Inducted into the Who's Who of Food and Beverage in America, DORIE GREENSPAN is the author of the

James Beard Award-winning Baking: From My Home to Yours. She worked with Jean-Georges Vongerichten in his first U.S. kitchen and was Elle magazine's first food writer, recipe tester, and translator. With Pierre Herm, Dorie wrote Desserts by Pierre Herm, winner of an IACP Cookbook of the Year Award, and Chocolate Desserts by Pierre Herm, winner of the Gourmand prize for best cookbook in the English language. A contributing editor for Parade, a long-time special correspondent for Bon App tit, and frequent guest on NPR's All Things Considered and The Splendid Table, Dorie lives in Paris, New York, and Westbrook, Connecticut.

A ticket is $10.00 with $5.00 good towards the purchase of the book at R.J. Julia Booksellers.  Tickets available at the Madison Beach Hotel.