An Evening With David Sedaris

David Sedaris, author of the previous bestsellers Calypso, Naked, Me Talk Pretty One Day, Dress Your Family in Corduroy and Denim, and regular National Public Radio contributor, will be appearing for one night only at The Bushnell's William H. Mortensen Hall on October 19, 2021, following the release of his newest book, A Carnival of Snackery.

This is a unique opportunity to see the best-selling humorist in an intimate setting. As always, Sedaris will be offering a selection of all-new readings and recollections, as well as a Q&A session and book signing.

With sardonic wit and incisive social critiques, Mr. Sedaris has become one of America’s pre-eminent humor writers. The great skill with which he slices through cultural euphemisms and political correctness proves that Sedaris is a master of satire and one of the most observant writers addressing the human condition today.

If you love David Sedaris’s cheerfully misanthropic stories, you might think you know what you’re getting into at his live readings. You’d be wrong. To see him read his own work on stage allows his autobiographical narrative to reveal a uniquely personal narrative that will keep you laughing throughout the evening. Don’t miss this event! 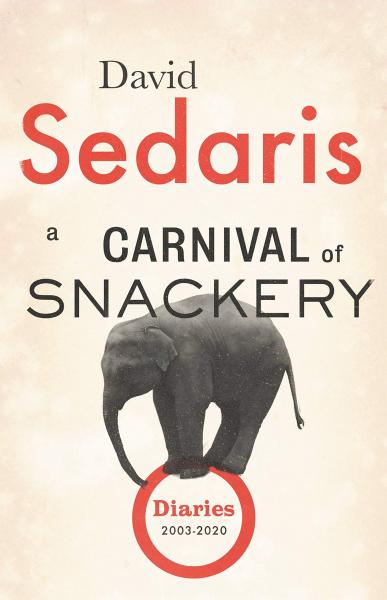 There’s no right way to keep a diary, but if there’s an entertaining way, David Sedaris seems to have mas­tered it.

If it’s navel-gazing you’re after, you’ve come to the wrong place; ditto treacly self-examination. Rather, his observations turn outward: a fight between two men on a bus, a fight between two men on the street, pedestrians being whacked over the head or gathering to watch as a man considers leap­ing to his death. There’s a dirty joke shared at a book signing, then a dirtier one told at a dinner party — lots of jokes here. Plenty of laughs.

These diaries remind you that you once really hated George W. Bush, and that not too long ago, Donald Trump was just a harm­less laughingstock, at least on French TV. Time marches on, and Sedaris, at his desk or on planes, in hotel dining rooms and odd Japanese inns, records it. The entries here reflect an ever-changing background — new administrations, new restrictions on speech and conduct. What you can say at the start of the book, you can’t by the end. At its best, A Carnival of Snackery is a sort of sampler: the bitter and the sweet. Some entries are just what you wanted. Others you might want to spit discreetly into a napkin.

David Sedaris is the author of eleven previous books, including, most recently, The Best of Me, Calypso and Theft by Finding. He is a regular contributor to The New Yorker and BBC Radio 4. In 2019, he was inducted into the American Academy of Arts and Letters. He is the recipient of the Thurber Prize for American Humor, Jonathan Swift International Literature Prize for Satire and Humor, and the Terry Southern Prize for Humor.