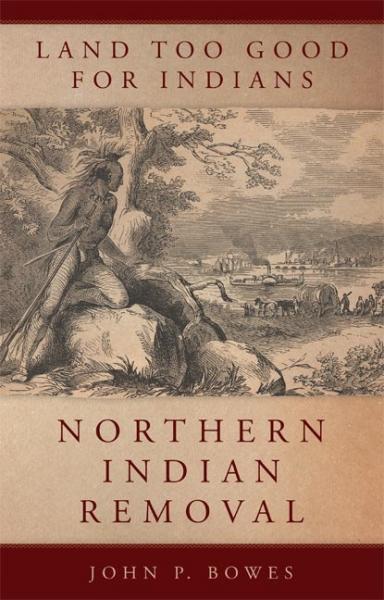 The history of Indian removal has often followed a single narrative arc, one that begins with President Andrew Jackson’s Indian Removal Act of 1830 and follows the Cherokee Trail of Tears. In that conventional account, the Black Hawk War of 1832 encapsulates the experience of tribes in the territories north of the Ohio River. But Indian removal in the Old Northwest was much more complicated—involving many Indian peoples and more than just one policy, event, or politician.

In Land Too Good for Indians, historian John P. Bowes takes a long-needed closer, more expansive look at northern Indian removal—and in so doing amplifies the history of Indian removal and of the United States.

Bowes focuses on four case studies that exemplify particular elements of removal in the Old Northwest. He traces the paths taken by Delaware Indians in response to Euro-American expansion and U.S. policies in the decades prior to the Indian Removal Act. He also considers the removal experience among the Seneca-Cayugas, Wyandots, and other Indian communities in the Sandusky River region of northwestern Ohio. Bowes uses the 1833 Treaty of Chicago as a lens through which to examine the forces that drove the divergent removals of various Potawatomi communities from northern Illinois and Indiana. And in exploring the experiences of the Odawas and Ojibwes in Michigan Territory, he analyzes the historical context and choices that enabled some Indian communities to avoid relocation west of the Mississippi River.

In expanding the context of removal to include the Old Northwest, and adding a portrait of Native communities there before, during, and after removal, Bowes paints a more accurate—and complicated—picture of American Indian history in the nineteenth century. Land Too Good for Indians reveals the deeper complexities of this crucial time in American history.

John P. Bowes is Associate Professor of History at Eastern Kentucky University and author of several books on Indian removal, including Exiles and Pioneers: Eastern Indians in the Trans-Mississippi West.

If you're unable to attend the event and would like a signed copy of Land Too Good for Indians, please purchase the "Signed" version below.