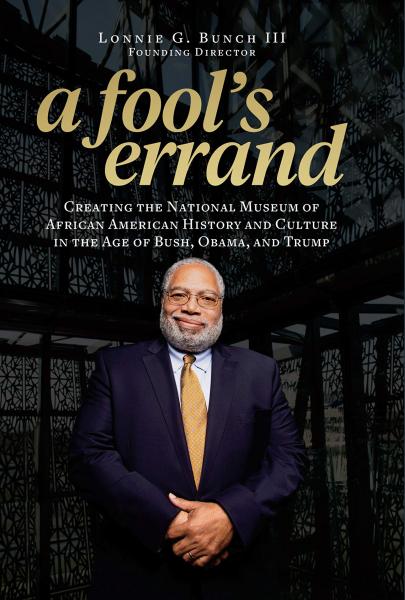 Please note, this event has reached capacity and is sold out.  Thank you for your interest!

Founding Director Lonnie Bunch's deeply personal tale of the triumphs and challenges of bringing the Smithsonian National Museum of African American History and Culture to life. His story is by turns inspiring, funny, frustrating, quixotic, bittersweet, and above all, a compelling read.

In its first four months of operation, the Smithsonian National Museum of African American History and Culture surpassed one million visits and quickly became a cherished, vital monument to the African American experience. And yet this accomplishment was never assured. In A Fool's Errand, founding director Lonnie Bunch tells his story of bringing his clear vision and leadership to bear to realize this shared dream of many generations of Americans.

Outlining the challenges of site choice, architect selection, building design, and the compilation of an unparalleled collection of African American artifacts, Bunch also delves into his personal struggles--especially the stress of a high-profile undertaking--and the triumph of establishing such an institution without mentors or guidebooks to light the way. His memoir underscores his determination to create a museum that treats the black experience as an essential component of every American's identity.

This inside account of how Bunch planned, managed, and executed the museum's mission informs and inspires not only readers working in museums, cultural institutions, and activist groups, but also those in the nonprofit and business worlds who wish to understand how to succeed--and do it spectacularly--in the face of major political, structural, and financial challenges.

Please note, this event has reached capacity and is sold out.

Thank you for your interest!

Presented by the Yale Peabody Museum and RJ Julia Booksellers, with support from the Office of the President, Yale University. Support for Secretary Bunch’s national book tour is provided by Toyota.

A Fool's Errand: Creating the National Museum of African American History and Culture in the Age of Bush, Obama, and Trump (Hardcover)