When Brian Phelps told me in the fall of 2019 that he was working on a book that would tell the amazing storied history of Toad’s Place, I suggested he bring me on board for a collaborative effort. I was gratified he quickly agreed to forming this partnership. The Toad’s story is how two partners, Brian Phelps and Mike Spoerndle, used their passion and skills to make Toad’s nationally known as a major music venue despite holding only about 750 people.   — Randall Beach, Preface 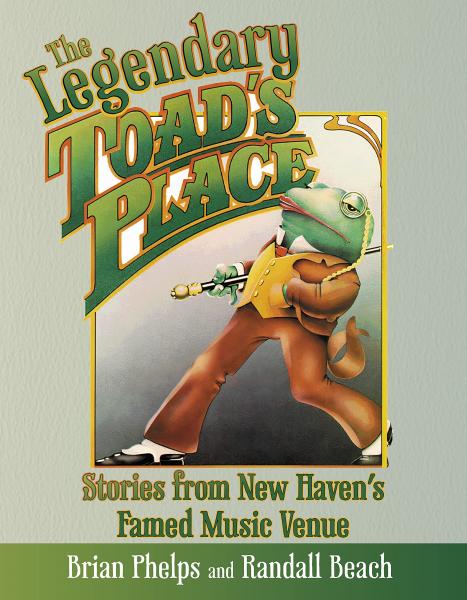 Anyone who has lived near New Haven, Connecticut, in the past 40-plus years has surely heard of Toad’s Place. With a capacity of 750, Toad’s has served as the perfect spot for musicians who prefer smaller venues. U2 played one of their first US concerts there, on their Boy tour. In 1978, Bruce Springsteen was in New Haven and arrived at Toad’s unannounced, and got up and played. The surprises kept coming and the club was attracting big names, as well as up-and-comers. In 1989, the Rolling Stones played a surprise show on a Saturday night, giving 700 fans the night of their dreams. Nothing could have been better — the Rolling Stones in downtown New Haven was unimaginable! That is only a taste of the stories that are uncovered in this book. Randall Beach and Toad’s owner Brian Phelps recall the legendary shows and behind-the-scenes stories.

What I loved about Toad’s Place is that they let you do more than just show up and set your band up and play. You could actually curate some kind of show that was interesting to people, different.

Brian Phelps was born in New Haven, Connecticut. His music background was nothing more than listening to AM radio or watching an Elvis Presley flick. He had no idea where his path in life was about to lead. Brian met Mike Spoerndle, owner of the new Toad’s Place in 1975. One year later, Big Mike invited Brian to start working at the club, following college. Several years later, Mike made Brian an offer to become business partners. In January 1995, Brian took control of the company and bought the rest of the business in 1998. Brian later met with longtime associate Randall Beach and decided to write a memoir. He took “a road less traveled,” but one we think you will enjoy reading about.

REGISTERED ATTENDEES WILL RECEIVE THE LINK TO THE VIRTUAL EVENT.