William Stolzenburg, "Heart of a Lion" 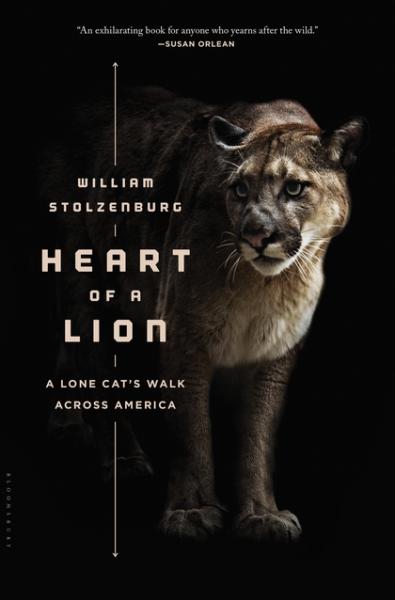 Late one June night in 2011, a large animal collided with an SUV cruising down a Connecticut parkway. The creature appeared as something out of New England's forgotten past. Beside the road lay a 140-pound mountain lion.

Speculations ran wild, the wildest of which figured him a ghostly survivor from a bygone century when lions last roamed the eastern United States. But a more fantastic scenario of facts soon unfolded. The lion was three years old, with a DNA trail embarking from the Black Hills of South Dakota on a cross-country odyssey eventually passing within thirty miles of New York City. It was the farthest landbound trek ever recorded for a wild animal in America, by a barely weaned teenager venturing solo through hostile terrain.

William Stolzenburg retraces his two-year journey--from his embattled birthplace in the Black Hills, across the Great Plains and the Mississippi River, through Midwest metropolises and remote northern forests, to his tragic finale upon Connecticut's Gold Coast. Along the way, the lion traverses lands with people gunning for his kind, as well as those championing his cause.

Heart of a Lion is a story of one heroic creature pitting instinct against towering odds, coming home to a society deeply divided over his return. It is a testament to the resilience of nature, and a test of humanity's willingness to live again beside the ultimate symbol of wildness.

Will Stolzenburg has studied predator control techniques and worked as a wildlife technician, monitoring endangered species. He has written hundreds of magazine features and columns on the ecology of rarity and extinction for Science News and Nature Conservancy, among others. He lives in Shepherdstown, West Virginia.

Leading up to this event, Christopher Spatz, of the Cougar Rewilding Foundation, and the author Will Stolzenburg, will be walking from Greenwich where the cat was first photographed to Milford (the route of the book's final two chapters) where he was hit.

Heart of a Lion: A Lone Cat’s Walk Across America (Hardcover)