Take a walk down memory lane

Just Kids begins as a love story and ends as an elegy. It serves as a salute to New York City during the late sixties and seventies and to its rich and poor, its hustlers and hellions. A true fable, it is a portrait of two young artists’ ascent, a prelude to fame.

Warm and laugh-out-loud funny, and full of his inimitable, pitch-perfect observations, The Life and Times of the Thunderbolt Kid is as wondrous a book as Bill Bryson has ever written. It will enchant anyone who has ever been young.

Born a Crime is the story of a mischievous young boy who grows into a restless young man as he struggles to find himself in a world where he was never supposed to exist. The stories collected here are by turns hilarious, dramatic, and deeply affecting. Trevor Noah illuminates his curious world with an incisive wit and unflinching honesty. 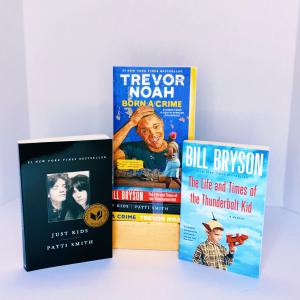